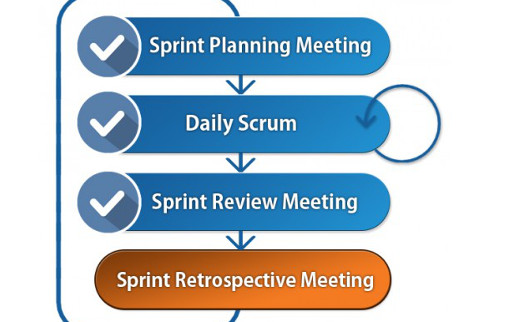 If the Sprint Review event was all about assessing your Increment (WHAT you made), the Sprint Retrospective is looking at HOW you made it, and what, you could do better moving forward.

A Sprint Retrospective has a refreshingly positive motive behind it – to find ways to make the next and future Sprints more enjoyable and productive.

Who Should Attend and When?

This is an event for the entire Scrum Team, so the Developers, Product Owner and the Scrum Master. The Sprint Retrospective is the very last event in a Sprint and is often held immediately after the Sprint Review. This event is often the most neglected one in Scrum, but it really is worth making an effort to do it and do it well. It where the real power of Scrum comes into play. It is a chance for the Scrum Team to improve and get better at what they do so they can create better products.

A common (but by no means the only) format for Sprint Retrospectives is for each member of the team to explain what they found good about the Sprint and, to the contrary, what they would like improved.

Three key questions may be answered:

Answers could be about team practices, the processes in place, the environment, tools, people, software or anything else considered relevant.

The objective is to come out of the Sprint Retrospective with a plan and some actionable improvements that can be implemented in a future Sprint. There may be many more things than can be accommodated immediately, so any items will need to be prioritised with the most important ones being worked on sooner. We may come back to lower priority items in subsequent Sprint Retrospectives and begin to deal with them when they are deemed important enough and time allows.

A good practice is to add the items identified to the Product Backlog so they are transparent and can be managed alongside other work that needs to be done. They will appear in a Sprint Backlog once they are planned to be implemented in a Sprint.

Common rules of a Sprint Retrospective are fairly straightforward – everyone should be allowed to speak freely, vague statements should be clarified, the blame game is not welcome and neither is anyone’s personal agenda. Likewise, high priority items that are raised must lead to concrete action points.

The Scrum Guide suggests that for a 1 month Sprint we timebox the Sprint Retrospective to 3 hours. Where the Sprint is shorter than 1 month it is likely the time box will be less. That is all the Scrum Guide suggests. Some teams will continue to use 3 hours even for shorter Sprints and this is fine if the time spent is deemed valuable. Other teams will spend proportionately less time, so for example will spend 1.5 hours for a 2 week Sprint.

As well as helping to improve the next Sprint and its processes, a Sprint Retrospective can also help to encourage self-management, increased ownership as well as bonding among Scrum Team members.